Snowboard BLOG - how to choose a snowboard .info

How to avoid cramps?

Published by @joaoobranquinho in snowboard Tips · 21/1/2020 04:12:00
Tags: snowboard, hydration, cramps, avoid, cramps, snowboard, training
Cramps when snowboarding can happen to beginners but also to more advanced snowboarders, specially at the beginning of the season, or to the ones who extend the days regularly, at the end of the day. But you can also get cramps while snowboarding just by pure dehydration. Just like on other sports, you will be more at risk of getting cramps while snowboarding if you are dehydrated or pushing your muscles beyond their usual type and amount of activity. So how to avoid cramps when snowboarding?
1 Get hydrated before your snowboard session and stay hydrated throughout.
2 Get a good physical preparation (legs and core) before going out to snowboard.
3 Use a more maneuverable snowboard: smaller, narrower, with a rocker profile.
Get those 3 thing done and you'll have fewer cramps when snowboarding, or none at all.

Published by @joaoobranquinho in Board Reviews · 20/10/2019 21:09:00
Tags: capita, slush, slasher, springbreak, 2018, 2020
The slush-slasher is yellow again! Hooray!!! This CAPITA/SpringBreak is a fell good board, a comfort-snowboard if you will, and let's face it, last seasons slush-slasher's colors were depressing as cheat. Those colors may fit other boards with other personalities, but the slush-slasher I see it as a FUN board, and a fun board requires fun colors.

Now in all fairness, the board I'm reviewing is the 2017/2018 model, the one I owned (and my ho my, did I own it, happy times on that short flexy bright thing), I can do it because the capita/springBreak slush-slasher is a board that changed few or nothing at all in this 2 seasons. And it's yellow again! (OK I'll stop it now).
The first day I've tried it my company said "you're flying on that thing!". It was in a figurative way, but I ended up really flying a bit on it since I've used it all season which included some considerable cliff-drops, although most of the season was on trees and slopes.

To land bigger stuff the slush-slasher is obviously not the best snowboard, but it's a board that makes the not so big stuff a lot more fun, maybe because it makes it a bit more technical or because it just makes it different. It's sooo refreshing to ride a board like this capita/springBreak when your mind tells you "lets just enjoy, no goals, fell the fun". And as riding different boards will naturally expand your skill-set, with the fun comes improvement.

So if you're looking for a little change, whether as a daily snowboard for more or less time or as a second/quiver board, the capita / spring break slush-slasher is here to make you smile. Just don't expect it to last forever, it's really not meant for that, the base and core are very soft and easy to blow up with heavier riding. Like most things, it's fun while it lasts!

The first European snowpass is ready for 2020

Published by @joaoobranquinho in News · 16/10/2019 19:25:00
Tags: snowpass.com
So this morning I had a LinkedIn mail notifying me that someone added me to her LinkedIn network. I barely visit LinkedIn and have never done anything with it, I just accept the few "add me to your network" requests I get, time to time. I usually don't pay much attention to these few new connections either, unless I'm spoken to. But this time it was someone with a Portuguese name (I'm Portuguese too) working for a company named snowpass. I thought "this must be a snow-sports related multinational company with representation in Portugal" and wanted to know more so I went to their website to check it out and found out about the first European snowboard/ski pass!

That's right, snowpass.com is a freshly founded company that offers the first European ski pass, and they're now backed by FIS (international ski federation), the main regulatory body in the ski industry. This was probably the best endorsement they could have got as it gives the project a lot of credibility right from the beginning. Both, clients and resorts, seem to be looking forward for the inaugural season and to see how well it works.

After knowing about the company and it's product I went on to learn about the people, about the company itself and it's short but strong history. It is a family company based in Portugal (Lisbon area, which is my residence area in the summer) doing it out of passion and doing it right!

Snowboard/ski passes for multiple resorts are a reality in the US since about 2000 but in Europe it had never been done before, maybe because of more bureaucracy or because most of the resorts in Europe are public, until now!

Published by @joaoobranquinho in The Riders Boards · 10/4/2018 13:22:00
Tags: Salomon, assassin, review
Rider: Dian Manolov   Level: Snowboard Instructor   Media: /dia.nanbono
Board: Salomon Assassin (2014)
How and where (which conditions) do you use it the most?
I use it everywhere and for everything, literally, as much park laps as freeride runs and on slopes too. My everyday board, to ride and teach.
What do you like the most about it?
Has a stable edge on slopes for my type of riding. It's easy to butter with and floats well in powder because of the softer nose and tail.
What could be better? Why?
It could be stiffer for even more stability and added pop 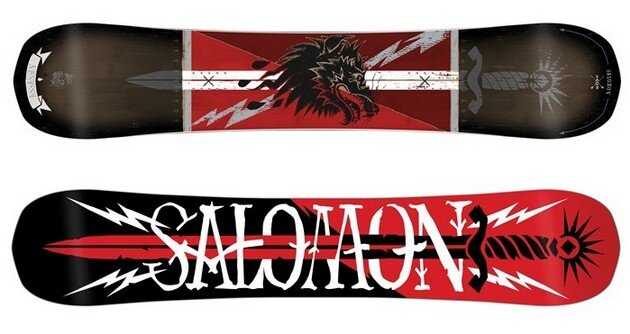 Published by @joaoobranquinho in Gear Reviews · 4/4/2018 16:19:00
Tags: union, bindings, strata, 2018, 2019
I've used Union bindings for a few years (the Force model), I've loved them at first, then I didn't anymore and then I've changed for something new. That something new was the Bent Metal - Transfer, smaller discs, lower hi-back, softer and more progressive but with a great (and I really mean great!) response. I was happy again with my bindings, as I still am.
Two weeks ago (about one year after dropping the Union-Force for the Bent Metal-Transfer) I've had the chance to try the new Union-Strata.
First thing that popped out on a first glance was the ankle strap, thin and made of plastic/rubber but still with the typical rectangular minimal shape of almost all union ankle straps. Then I've noticed the base, wide and rubbery, and then the hiback, smaller than the Force model and more similar to the bent metal hibacks.
While testing them I got surprised with how well this binding feels and works. The nice floating sensation that comes from the minidiscs plus the rubbery base and straps doesn't come alone, with the Strata binding Union managed to merge good responsiveness and support to that floating feeling that I (and so much more of us) appreciate so much.
If you've tried the Bent Metal - Transfer before, than the Union - Strata will feel similar but more progressive (floating feeling) and even more responsive. 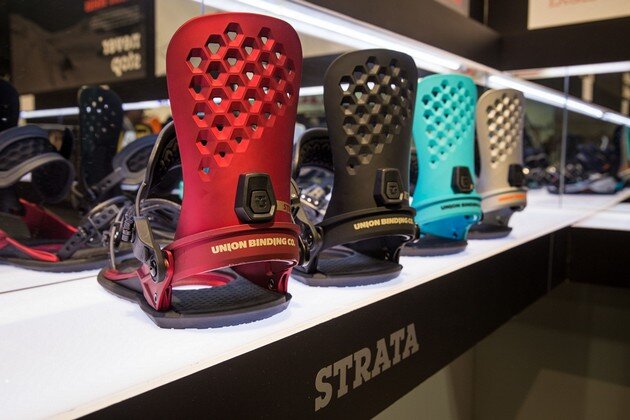 2020 update: The model I've reviewed in 2018 was the 2019 one, the first strata bindings, now comes their second year. People say the 2020 union strata is all about delivering control and response to the edge of the board. If Union improved the last strata model while keeping the same profile, then that is for sure a true description of these bindings. Even if there where no changes at all besides aesthetics the "it's all about response" still holds true.

Check out the bindings page to know how to choose your next snowboard bindings like a pro.